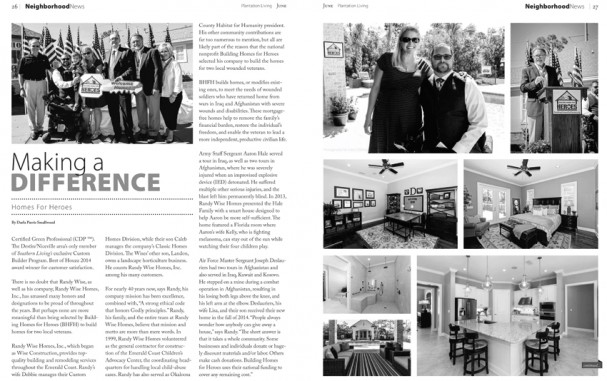 Randy Wise Homes is proud to have been featured in the Making a Difference section of the June 2015 Plantation Living magazine.  Plantation Living is a social publication for the residents of Kelly Plantation.  We hope you will take a moment to read the article below and learn more about Building Homes for Heroes. 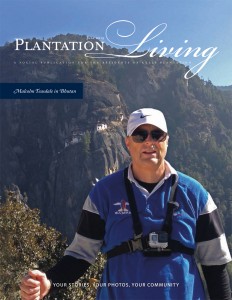 There is no doubt that Randy Wise, as well as his company, Randy Wise Homes, Inc., has amassed many honors and designations to be proud of throughout the years. But perhaps none are more meaningful than being selected by Building Homes for Heroes (BHFH) to build homes for two local veterans.

For nearly 40 years now, says Randy, his company mission has been excellence, combined with, “A strong ethical code that honors Godly principles.” Randy, his family, and the entire team at Randy Wise Homes, believe that mission and motto are more than mere words. In 1999, Randy Wise Homes volunteered as the general contractor for construction of the Emerald Coast Children’s Advocacy Center, the coordinating headquarters for handling local child-abuse cases. Randy has also served as Okaloosa County Habitat for Humanity president. His other community contributions are far too numerous to mention, but all are likely part of the reason that the national nonprofit Building Homes for Heroes selected his company to build the homes for two local wounded veterans.

BHFH builds homes, or modifies existing ones, to meet the needs of wounded soldiers who have returned home from wars in Iraq and Afghanistan with severe wounds and disabilities. These mortgage free homes help to remove the family’s financial burden, restore the individual’s freedom, and enable the veteran to lead a more independent, productive civilian life.

Army Staff Sergeant Aaron Hale served a tour in Iraq, as well as two tours in Afghanistan, where he was severely injured when an improvised explosive device (IED) detonated. He suffered multiple other serious injuries, and the blast left him permanently blind. In 2013,

Randy Wise Homes presented the Hale Family with a smart house designed to help Aaron be more self-sufficient. The home featured a Florida room where Aaron’s wife Kelly, who is fighting melanoma, can stay out of the sun while watching their four children play.

Air Force Master Sergeant Joseph Deslauriers had two tours in Afghanistan and also served in Iraq, Kuwait and Kosovo.  He stepped on a mine during a combat operation in Afghanistan, resulting in his losing both legs above the knee, and his left arm at the elbow. Deslauriers, his wife Lisa, and their son received their new home in the fall of 2014. “People always wonder how anybody can give away a house,” says Randy. “The short answer is that it takes a whole community. Some businesses and individuals donate or hugely discount materials and/or labor. Others make cash donations. Building Homes for Heroes uses their national funding to cover any remaining cost.”

When BHFH asked his company to help, Randy did not hesitate. Not only were they confident that they had the experience to do a great job, but helping and supporting the military are a part of their core values. “When you talk to either of these veterans about all they’ve been through, they tell you, ‘I’m not a hero; I was just doing my job,’ and, ‘I’d do it all over again.’ Well, when I hear that, how can I not say, ‘What else can I do for you?’”

But Randy quickly changes the focus to thanking so many others that helped make the new homes possible. “This whole experience was just another piece of evidence of what a wonderful community we live in. People responded with open hearts — and open wallets. Our family loves being a part of the area, and calling Kelly Plantation home. It’s a special, special place to live.” 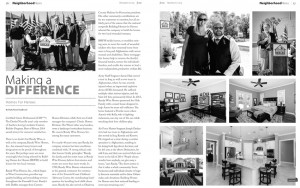 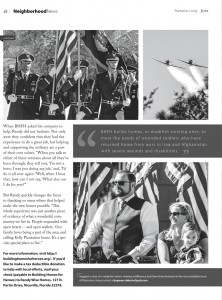